A majority of Dustin’s published work comes packed in between the pages of Aphotic Realm Magazine. Each issue features roughly one or two of his interviews with industry professionals. You can check them out on Amazon.com.

Issue 1, Apparitions: The One Who Calls Himself By Name (Editorial). Dustin shares his experience from the time he went on a ghost hunt with some self proclaimed “ghost hunters,” his sister, and her boyfriend.

Issue 2, Banished: The Tell-Tale Storyteller: An Interview with Christopher Ramsey. 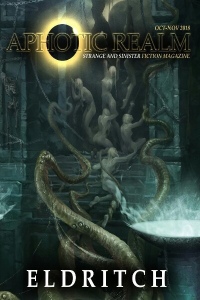 Issue 5, Eldritch: The Mountains That Whisper (Fiction) Dustin’s companion/ode to Lovecraft’s own, The Whisper In Darkness, a man struggling with the death of his wife, receives disturbing news from the constable of Townshend, Vermont, that leaves him with a mystery which will drive him mad or die trying to solve.

Issue 5, Eldritch: On Lovecraft: an Interview with S.T. Joshi: Dustin interviews Joshi, one of the leading experts on Lovecraft, the creator of the subject matter this issue of Aphotic Realm’s theme was based on.

Issue 6, Fangs: Building a Great Monster: an Interview with Adam L.G. Nevill, bestselling author of The Ritual and more.

Universal Threat Level : Dustin and Bo Chappell join forces as The Geek-Men to write a fun threat assessment about the Universal Monsters.

Burying the Hatchet: Dustin and Bo combine to send out an important message about the importance of kindness and the Golden rule.

By Year’s End: A Year 47 Anthology

Dustin’s story, Dead Falls, was selected to be a part of the seven other authors that came together for Bo Chappel’s Year 47 anthology.

Story Synopsis: A horror-western story about one man’s burning revenge, a family’s fight to survive, and a sadistic murderer as they travel to Dead Falls, careful to avoid the unspeakable horrors unleashed from Hell that roam the Earth.

Book Synopsis: “ONLY AT THE END CAN WE LOOK BACK…” Does hope perish alongside God? From the world of YEAR 47 comes nine short stories of survival-horror in The New West, where humanity is left to judge themselves among the remnants of Heaven and Hell in an amalgamated world orphaned by its creator. Featuring eight of the most talented writers in the indie horror community, BY YEAR’S END shows us where we’ve been and where we’re going, leading up to the events of the Best Selling Novel YEAR 47 (Named 2016’s Horror Book of the Year by Horror-Writers.com). So whether this is your first step into the New West, or you’re returning to find answers, prepare yourself for a wild ride filled with adventure, sorrow, and terror on every page.

YEAR 47 and its bonus book, MISSING DAYS, are available on Amazon.

At the end of a rope with nowhere left to turn, Dead End: A Collection of Short-lived Stories, takes a look at what plays out inside the minds of those with nothing to lose and everything to gain. This collection of seven stories has it all from horrific scenes and the paranormal to laughter and tears.

A persistent individual might find this still available on iBooks or Smashwords but it has since been removed from Amazon. The plan is to one day reform this short collection.

Dustin was a list article writer for Comic Book Resources from May to July 2017. CBR’s mission is to cover comics, movies and tv like no other in the world as they strive to be the only site you need for your comic book news! Dustin has currently written several articles. You can check them all out here.

Library of Will Articles

Dustin wrote over 20 articles for Library of Will (libraryofwill.com) before “LOW” closed it’s doors early 2017. The website was dedicated to providing in-depth articles about deck theory and tournament analysis for the collectible card game Force of Will.

Click here to view a few of his archived articles that were retrieved before the site went debunked.

Check out www.aphoticrealm.com for the latest announcement about the status of General Submissions. . . #writerslife #amwriting #strangeamdsinister #aphoticrealm #writingcommunity #horror #horrorwritersofig #writersofig
Submissions for Interstellar and Novellas are coming to a close at the end of the month as well! Be sure to get yours in! . . #ad #advertising #indiepub #indiepress #marketing #horrorcommunity #scificommunity #darkfantasycommunity #amwriting #writersofinstagram #writingcommunity #strangeandsinister #adspaceavailable
Trust me. It’s better this way.
WRITING! Mister Rogers said it best. . . #amwriting #mrrogers #creating #writingcommunity #writerslife #mondaymotivation #creatingpositivechange
OPEN NOVELLA SUBMISSION CALL! If you have a novella that meets our #StrangeandSinister requirements, check out our submission guidelines and get your #novella in before the deadline! https://aphoticrealm.com/submissions/novellas/ . . #AphoticRealm #aphoticrealmpress #novella #horror #scifi #darkfantasy #amwriting #submissions #writersofinstagram
Three Year Anniversary Issue! Issue #9 Coming February/March 2020 Interstellar: Horror Among the Stars. We only have one rule: your story can't take place in our solar system. Not a moon base. Not on Mars. Explore the far reaches of space. For more, visit: aphoticrealm.com/submissions #writersofinstagram #writersofig #horror #space #sciencefiction #aphoticrealm #strangeandsinister #amwriting