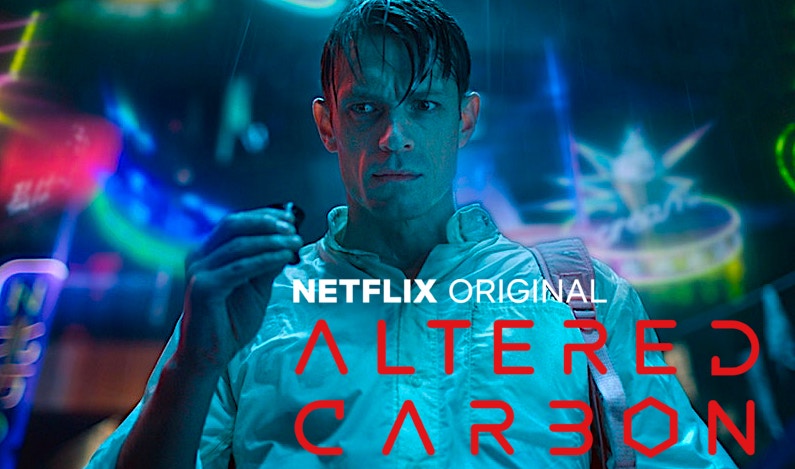 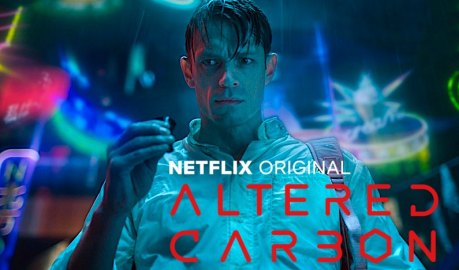 HEY! Long time no post, right? Shame on me but I’ve been busy working and growing my business, Aphotic Realm. For those that don’t know, its a literary website and magazine that specializes in the Strange and Sinister horror, sci-fi, dark fantasy, and mystery. Do yourself a favor and check it out.

Now, on to my review. A few months back I got the flu and was instructed to stay home. In-between fever dreams, the highlight of my seclusion from my wife and kids was the Netflix Original Series, Altered Carbon.

Naturally, I devoured the series as this is straight up my alley. Upon completion, I was determined to read the source material by Richard K. Morgan. Recently, with the help of the wonderful app/service, “hoopla,” I was able to consume, book 1 of the Takeshi Kovacs series, Altered Carbon. If you haven’t heard of it, Hoopla is a digital service that partners with participating local libraries to lend digital media to their patrons. Just download the app, search for your local participating library, and enter your library card. At your fingertips you’ll find countless audiobooks, e-books, movies, and comics.

I’ve included my review of Altered Carbon from Goodreads below. After the jump, I’ll continue with more colorful anecdotes and my thoughts on the Netflix series.

Altered Carbon by Richard K. Morgan
My rating: 5 of 5 stars

This was a fantastic read. As far as comparing to the Netflix series, it holds up. The show followed the book beat for beat–for the most part. There were a few small details or events that happened differently but it’s all pretty much there. Reading it was a true pleasure, the opening sequence was described with such beautiful precision that as a writer, I feel compelled to re-read/study that specific passage in hopes of improving my own craft.

I listened to the unabridged audio version and I must say, the narrator, Todd McLaren, sounds EXACTLY like James Purefoy’s portrayal of Laurens Bancroft. It was eerie. Fantastic performance by McLaren.

View all my reviews

One particular difference–no spoilers I promise (maybe a slight spoiler if you’re a stickler for details)–was the change in Hotel personalities. In the book, it didn’t quite come across to me that the hotel’s personality/construct was Jimi Hendrix. They called it The Hendrix but it never registered despite the one scene where all of his “human modifications” were stripped away and it was just his core essence in virtual. However, maybe seeing it, maybe just the fact that it was Poe, added a whole new dimension to the character and Poe became one of my favorite characters of the show.

After reading the book and watching the show, the cast that the Netflix team assembled is like watching the characters come to life off of the page.

Overall, I highly recommend both the Netflix series and the book. They are equally fantastic.